Chronixx has always made it his point of duty to emphasize his hometown – Spanish Town, so it was only fitting that his album had “Spanish Town Rocking” as the very first track. Sampled from Barrington Levy’s “Prison Oval Rock” Riddim, the track was descriptive about his life in De La Vega and effortlessly flowing with old school and modern vibes.

“Skankin’ Sweet” had the whole world literally skankin’ after its release. It simply gets better after every listen. The music video, released in 2018, portrayed the beauty of reggae music despite a world of despair and chaos – a safe haven.

Number Four on the album is “Ghetto Paradise,” an oxymoron turned into a stunning single that captures the hardships of living in Jamaica despite the fact that it’s beautiful. This track spoke to the persons who are convinced Jamaica is just a Paradise - “I live where you vacate” comes to mind. Chronixx speaks on the struggles ordinary Jamaicans face.

There’s beauty in transition and Chronixx has embedded that from talks of reality and struggles in Jamaica to, a smile. Chronixx lightens things from the reality of it all to words of encouragement in the remastered version of “Smile Jamaica”. “Smile Jamaica” has proven to be one of the go-to Jamaican songs when celebrating patriotism since its release.

After smiling through the struggles, Chronixx encourages us and gives thanks with the 7th track, “I Can.” From aerial views of the lush green trees to the beautiful beaches and the kids on the streets, the church, people ‘liming’ - the music video was by far one of the greatest.

Chronixx said “a nuh everybody a guh like we” in the 12th track on the album, “Likes.” This tracked proved to stand the test of time in the music industry as it is still a favourite worldwide. It seems Chronixx doing it for the love and not the likes proved substance over hype is the way to go as ironically, this track racked up the most views from the album on YouTube and Spotify.

The other tracks from the album include “Majesty”, “Black is Beautiful”, “Country Boy”, “Selassie Children”, “Loneliness”, “Christina”, bonus track, “I Know Love”, “Tell me Now” and “Legend.”

Chronixx served Jamaica what they never knew they needed in 2017 with “Chronology” and continues to reign as the Reggae Revivalist. Chronixx has put in the work that’s lasting today and will for years to come as he doesn’t just sing, he sings to make a difference. From then until now, it remains a stable in heavy rotation on Jamaica’s most popular adult contemporary station, KOOL 97 FM. 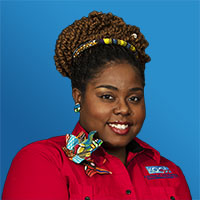 Abigay Wilson is the producer of Entertainment 97 and various special features on Kool 97 FM. She is also a freelance Entertainment and Lifestyle writer. She enjoys reading, writing, cooking and indulging in comical television series. Her mantra currently is “Have Big Dreams.... You’ll Grow into Them”