In the mid-1960s, St. Thomas native Sonia Pottinger entered the male dominated world of record producing. Sonia had already been exposed to the business, as she was the wife of record producer and Tip Top Record Shop owner, Lindon Pottinger.

Lindon had produced hit songs such as "My Happy Home" by Roy and Patsy, and "Bewildered" by Jimmy James, among others, in the early 1960s. She assumed the reins of the business in the mid-1960s, and began to blaze her own path. Her first master stroke was to recruit popular trumpeter Baba Brooks as her musical director, and to lead her recording band. Brooks was well-known in recording circles, having worked with seasoned producers such as Duke Reid, King Edwards, and Prince Buster, and Sonia drew on this experience.

It was a magnificent start. Her first effort in 1965, which appeared on her now iconic Gayfeet record label, was the plaintive ballad "Every Night", by Joe White and Chuck. The song reached number one on the Jamaican Hit Parade, and was one of the biggest hits of 1965. This earned for her the West Indies Records Limited award for "producer of the best record of the year". Her second number one came within two months of her first, in the bolero flavored "Brown Eyes", by the Saints. In early 1966, she again topped the hit parade with "My Love for You", another wistful ballad by her first hit makers, Joe White and Chuck. There were popular ska instrumentals by the Brooks band too, such as "Roll Call", Cocktails for Two", "1st. Session", "This is Thunder", and "Contact" by Harmonica player Roy Richards. 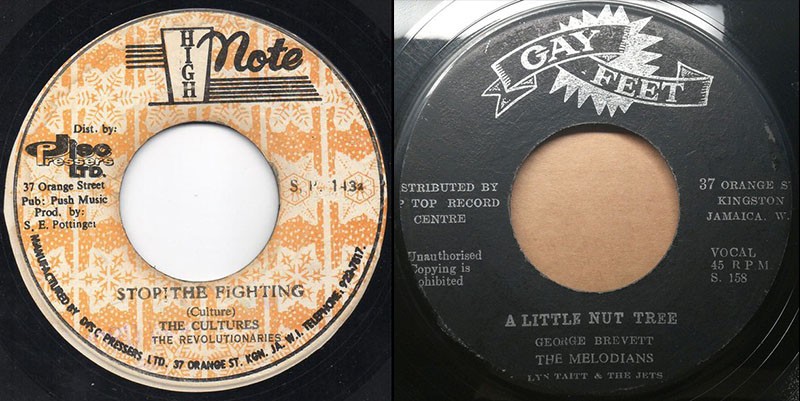 Between 1966 and 1968, the frenetic ska transitioned into the easy sway of rocksteady. Here Sonia made some of her most memorable contributions. Regarded as one of the creators of rocksteady, Trinidadian guitarist Lyn Taitt, with his band, the Jets, provided backing on many of Pottinger's classic rocksteady songs. Perennial favorites include "Swing and Dine" and "A Little Nut Tree" by the Melodians, and "It's Hard To Confess", ABC Rocksteady, and "Over The Rainbow's End" by the Gaylads. There was "Lady with the Starlight" and "Say You" by Ken Boothe, and "Give Me The Right" and "Down by The Train line" by Stranger Cole and Patsy Todd. Her Tip Top Record Center at 103 Orange Street, and later on at 37, was a constant buzz of activity, as buyers flocked to the store for her latest releases.

By 1970, rocksteady had evolved into reggae, and Delano Stewart was one of her main singers in this period. Appearing on the Gayfeet and High Note labels, hits by Stewart included "Dance With Me", That's Life", and "Stay a Little Bit Longer". The success of these and others led to an album of hits by Stewart in 1970 entitled, "Stay a Little Bit Longer". Another milestone album she released was "Darling Ooh", the first for rising singer Errol Dunkley in 1972.

While some producers shied away from the roots reggae of the turbulent 1970s, Sonia embraced it. When Kingston erupted into violence she released a song of plea by reggae group Culture, to "Stop The Fussing and Fighting". The social commentary continued with "Peaceful Woman" and "Stepping Out A Babylon" by Marcia Griffiths. These are merely a few from the extensive catalog of Jamaica's first female producer. In 2004, twenty years after retiring, Sonia Pottinger was given national honors, recognized for her contribution to music with the Order of Distinction. Sonia Pottinger died on November 3, 2010, leaving behind a rich legacy of recordings that are enjoyed, not only in Jamaica, but globally.