The role played by singers and musicians of Jamaica's first popular music, mento, in the attractiveness of the island as a tourism destination—particularly in the 1950s and 1960s—remains under-acknowledged. They were vital to the tourist-driven entertainment programs of hotels and nightclubs across the island. Mento, however, was marketed as calypso (Trinidad's native music, which mento musicians also played), by local stakeholders in entertainment to capitalize on its international popularity. The huge success of "Rum and Coca Cola," a calypso by American vocal trio the Andrews Sisters in the mid-1940s, and the mega popularity a decade later of Harry Belafonte, who had become the global face of calypso, was hard to ignore. The mento musician had become a calypsonian. Through witty lyrics and infectious rhythms, the mento musician shared his culture with the world, through visitors to the island, and Leonard Williams was one of these cultural craftsmen.

Leonard Lloyd Williams was born in Bethany, Manchester in 1925 and attended an elementary school there. His parents migrated to Kingston in the 1940s, and he completed his education at the Ebenezer school in Western Kingston. Williams had developed a penchant for calypso songs and from an early age was writing his own. He began performing at small parties in both rural and urban areas, and was gaining repute as a calypso singer. His big break into show business came in 1947 when he began appearing at stage shows at the Rialto and Gaiety theaters. Vere Johns' Opportunity Hour show, which had been unearthing Jamaican musical talent since the late 1930s, was the next big step for Williams. He entered the competition and made it to the semi-finals at the Rialto in 1948, where he sang his own calypso composition called "Power Blues". It was at the Rialto around this time also that Leonard Williams became Lord Power, a moniker given to him by singer and MC Ben Bowers.

His popularity grew steadily and he began appearing at a few of Kingston's finest nightclubs, like the Glass Bucket, the Rainbow, the Sugar Hill, and the Colony Club, among others. At the Tropical Theater in June 1950, Lord Power was among a group of four calypso acts chosen to compete for the opportunity to appear in "Sunken Treasure," a Kingswood Films movie that was being shot in Jamaica.The Gleaner on June 26, 1950 mentions his performance "The Stanley Maxwell Trio followed with Lord Power giving out with two of his own compositions, 'Unity'…'Judy Drownded'. Power was in good form and worked hard but needed greater support than a 3-piece band could give him." Part two of the selection process was planned to decide which act would appear in the film, this however, never materialized. It may have felt like a missed career-boosting opportunity to Power, but another such moment was near. 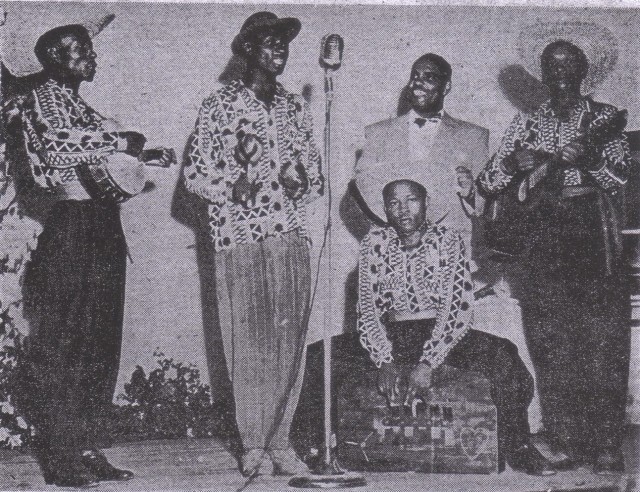 Capitalizing on calypso's growing local popularity was entertainer and impresario Eric Coverley, who staged the first All Island calypso band competition at the Ward Theater on July 27, 1953. Lord Power and his Calypso Squatters entered this novel competition with 12 other bands. Power and his group had gotten a boost in fame prior to the competition, as Stanley Motta, owner of Jamaica's first recording studio, had recorded and released four sides with them. These were "Miss Goosey," "Solas Market," "Go Gal Go," and "I'm Sorry For Myself," which appeared on Motta's now legendary MRS label. The high level of participation made it a long and arduous task for the judges, but in the end, Lord Power was declared the winner. His closest rivals were, Lord Messam, who finished in second place, Lord Food and his Firehouse Four, and Clyde Hoyte and his Sunbeams, who both shared third place.

The panel of judges had some impressive names, such as noted comedian Randolph "Ranny" Williams, venerated pianist George Moxey, and journalists Aimee Webster and Harry Milner. Milner gave his post review of the contest in The Daily Gleaner on July 31, 1953, "Lord Power and his Calypso Squatters gained first prize…we especially liked his naturalness, his verve, his true calypso style. He also did not rely too much on instrumentation. After all a calypso is basically a song that get half its effect over from its words". Respected journalist Hartley Neita, in his post report in the Star on August 5, 1953, basically concurred with Milner "Power composes calypsos. Actually it was because of the originality of his songs coupled with the calypso spirit which he injected into his singing that gave him the edge over other competitors in the contest". Among his original works were "Power Blues," "Muddy Water" and a new version of "Mango Time." His group consisted of himself on vocals and maracas, Astley White on the marimba box, Royston Gayle on guitar, and Cyril Beckford on banjo. There were other members over time, such as bamboo sax and clarinet player Kenneth "Count Sticky" Scott. Beverley Ferron —daughter of bamboo sax player Ben Ferron—states of her dad, "my father also blow sax in Lord Power band…He use go to the wharf on Monday mornings with Lord Power the band leader to bring in the tourists." 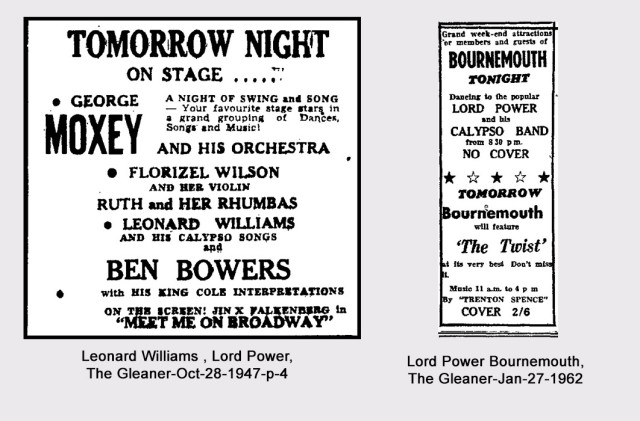 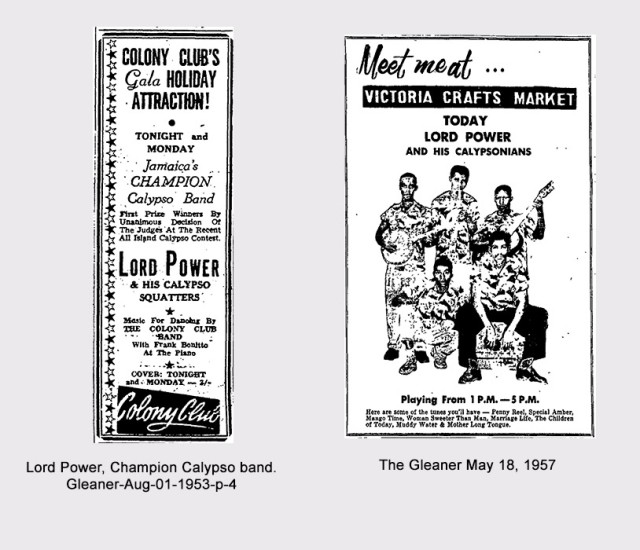 This victory thrust Lord Power into the national spotlight, and with it came an increase in appearances at concerts, and on radio. Sound system pioneer Arthur "Duke" Reid also capitalized on Lord Power's popularity, and made his first foray into recording with two mento sides by him. These were "Penny Reel" and "Chambolina," which initially, were pressed exclusively for his Trojan sound system. "Penny Reel" enjoyed wide popularity, but not everyone was enamored by it. There were strong calls from within the church, and from Minister of Trade and Industry Wills O. Issacs, for it and other calypso songs to be banned for vulgarity. Here's the line from Power's "Penny Reel" that some found offensive "Gal yu owe mi likkle money, and yu nuh have enough fi gimmi, a beg you shub the kushu [vagina] gimmi…and mek mi rub out mi money." In the Star on April 19, 1956, a reader declared that such songs were "…corrupting the morals of our children".

The record sold well despite the uproar, which had likely stimulated sales. That success prompted three more Reid exclusives with Lord Power, in "Strip Tease," "Let's Do It," and "One Baggie." All were written by Power, and appeared on the Hi-Lite label in 1956. Both "Strip Tease" and "Let's Do It" were again on the suggestive side. Another visionary of recording in Jamaica, Ken Khouri, also recorded Power on his Records Ltd. Kalypso imprint, with a medley of folk songs (see Kalypso label image). On the attractive Maracas label, Power and his calypsonians did "Special Amber Calypso," which promoted a popular rum of the day. According to Power's banjo player, Cyril Beckford, in an interview with ethnomusicologist Daniel Neely in 2022, "Special Amber" was recorded at Stanley Motta studios in 1956 for a businessman whose name is yet to be ascertained.

The 1960s brought changes in Jamaica's popular music, as mento and calypso yielded ground to ska and its successors, rocksteady and reggae, especially in urban areas. On the north coast however, in Ocho Rios and Montego Bay, calypso bands were still an integral part of tourist entertainment, but their importance was waning. Lord Power performed regularly throughout the 1960s, appearing often at the Terra Nova Hotel, the Flamingo Hotel, Hotel Kingston and the Bournemouth Club, and worked frequently on shows sponsored by the Ministry of Development and Welfare. His activities in the early 1960s also included shows in Guantanamo Bay, which had been organized by radio announcer Charlie Babcock and his brother Bob. Lord Power tried to move with the changing musical climate, and under the name Calypso Joe recorded "Adults Only," a mento-reggae hybrid for producer Bunny Lee in 1969 (68?). Under this name also was "Temptation," for producer Clement "Sir Coxsone" Dodd, which was a mento-reggae version of "Strip Tease," his earlier recording for Duke Reid. (Note: this Calypso Joe (Lord Power), is not to be confused with the Calypso Joe who performed locally in the 1950s). Times had indeed changed musically, but Leonard powered on nonetheless.Sadly, he wasn't able to fully embrace these changes in music.

On Christmas Eve in 1971, Lord Power was found un-conscious along the Washington Boulevard and was taken to the University Hospital. He never regained consciousness and on January 12, 1972, Leonard "Lord Power" Williams died at the age of 47. Mento had lost one of its symbolic figures with his passing, but his place in the history of Jamaican music is assured.